I recently had the opportunity to interview three federal law enforcement agents about their personal and professional training with kettlebells. The agency is now part of the new Department of Homeland Security and their mission requires that they maintain a high level of fitness. Within the past year they have incorporated kettlebells into their physical training (PT) for both new recruits and the more seasoned tactical operators. One of the agents works in the Special Operations Training Section and is a former tactical operator, one works as a Fitness Director for new agent recruits, and the other is also a former operator from a tactical assault team. Each was Russian Kettlebell Challenge TM certified by Pavel at their training facility. I chose these three agents because they each have individual goals and participate in different sports and activities. Each one has a different body type and uses a different weight training style.

Kettlebells are a Russian Old School training device that looks like a cannonball with a handle on it. They were traditionally used by the Russian Special Forces and Olympians. They are currently being used by some U.S. special forces, federal law enforcement agencies and SWAT teams. Kettlebells can be used for weight training, flexibility, and to increase strength and cardiovascular endurance. It is great for increasing core strength which produces sound tactical performance, increased speed and agility. 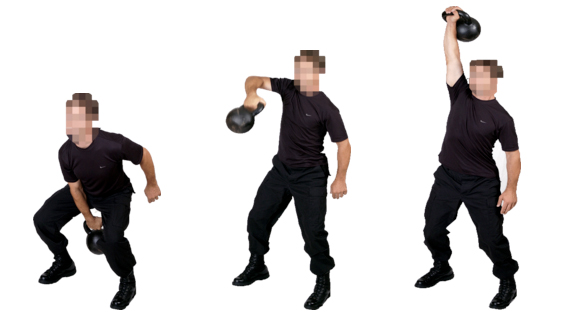 He played college football on scholarship for four years and competed in three drug-free bodybuilding contests. Currently he competes in the Police Olympics, which consist of swimming, a 5K run, a 100m sprint, throwing a shot put, the rope climb, and the bench press. Personally he is training for an adventure race, which consists of mountain biking, canoeing, and a run.

He played professional baseball from 1987-1990. Personally he trains for running, baseball, and softball.

He also played college football and has been a student of Martial Arts for 30 years. He has his black belt in four disciplines, Kodokan Tai-Jitsu, Shotokan Karate, Sumo Jiu-Jitsu, and Kenka Aikijitsu. Personally he trains because he always has. It is a lifestyle.

SA Carl:  He includes kettlebells in some form in every workout. He combines kettlebells with traditional weight lifting. He starts all weight lifting workouts with kettlebell swings for a warm up. He combines kettlebells with barbell squats and lunges for the legs. For shoulders he does various kettlebell presses using the 2-pood for as many reps as he can and then switches to the 1.5-pood. He really likes Turkish Get-Ups and Windmills for shoulders because of their full range of motion. He keeps his reps low with Turkish Get-Ups and Windmills, usually only 5 reps. On the days he works his chest he uses the 2-pood for weighted dips. For the back he does Renegade Rows and weighted pullups with the 1.5-pood. Depending on how he feels at the end of a workout he will do a few sets of snatches or jump shrugs.

SA Carl was very skeptical about kettlebells at first. But now he has experienced personally the benefits of kettlebell lifting. He doesn’t train with kettlebells only but expects that one day he will.

SA Eddie:  Wishes he had known about kettlebells when he was playing professional baseball. He thinks kettlebells are great for baseball players because of the shoulder strengthening. He says he has gained endurance for running from his kettlebell training. He works out twice a week. The exercises he uses are Two-Arm Swings, One-Arm Swings, Turkish Get-Ups, and Snatches.

SA Carl: He decreased his time in the 1.5-mile run. Part of the conditioning test for this law enforcement agency’s tactical operator training consists of pullups, pushups, situps, and the 1.5-mile run. SA Carl’s time decreased to less than 8 minutes in the run for the first time. He attributes his success to the Man Maker with kettlebells.

SA Eddie: His kettlebell training keeps his hamstrings strong for running. Because kettlebells also engage the hip flexors it makes him a more powerful runner. Improved running endurance is another benefit. Turkish Get-Ups have strengthened his legs and helped with coordination for baseball.

SA Ron: He immediately saw the benefits from lifting with kettlebells. It has enhanced his other lifts. He says he is a better lifter in squats and power cleans. His kettlebell workouts have given him the power to get through sticking points during the squat. Kettlebells have also enhanced his Martial Arts by improving his throwing and striking techniques. The basic hip ballistic movement forward (as performed with swings, snatches, and cleans) has a correlation to an increase in rotational velocity and acceleration of the hips while performing martial arts throwing techniques. An increase in rotational velocity and acceleration permits the thrower to generate more force (force = mass x acceleration, F=ma) and more momentum (momentum = mass multiplied by velocity, p=mv). He says the bottom line is that anyone who can generate more momentum and force has more essential components that make him/her a better martial artist. Kettlebells are essential building blocks for force and momentum generation beyond what normal weight training affords. There is also a balance component involved with ballistic kettlebell exercises. Kettlebells have forced him to develop good proficiency on his weaker side because kettlebells require you to work one side of your body and then the other. He says 70-80% of striking power comes from body mechanics and hip motion. His kettlebell workouts have improved both.

SA Carl: The Special Operations Training Section is where SA Carl works. He trains the tactical units. Their training is focused on conditioning and stamina. These units incorporate kettlebells into everything now. Kettlebells have become the cornerstone of their physical training (PT) program. They use a lot of DOE Man Maker training in conjunction with other “skills” training.

Kettlebells have provided more job specific training for them. It is more fun for the operators and definitely more effective. In the past they have done a 4-5 mile run and then a firearms course. Now they use the Man Maker to make it more like a real world scenario. Simulating what might happen in the real world by requiring shorter runs and then a couple of kettlebell exercises followed by proficient use of firearms are a great addition in preparing the operators to be able to perform their function when called upon.

Examples of their Man Maker workouts are front squats and a run, snatches and a run. Then they may also low crawl in the woods, do pullups, dips, kettlebell cleans, the fireman’s carry, and a tactical firearms course.

They also now have a 10-minute snatch test on the first day of candidate selection to gage stamina and endurance. They have an award for the candidate who does the most snatches. The test rules are; do as many reps as you can in 10 minutes with the 1.5-pood. Candidates may switch hands whenever they want. They can even drop the kettlebell and catch their breath if they must. The test has been in effect for three classes now. SA Carl holds the record at 224. The top number in the first class was 172, in the second class 187 and the third class 192. They have disqualified only 2 candidates for poor form.

SA Eddie: He trains the basic new recruits. Their focus is cardio, agility, and core strength. Their workouts look like this. They work in circuits; each exercise is performed for one minute with a partner with a one-minute rest in between. He blows a whistle and they switch exercises. The following is a sample of two of their workouts.

They chose these drills for two reasons; overall conditioning and ease of instruction. They only get a short period of time for PT and using kettlebells provides the most intense workout for the amount of time they have to train. The instructors find it easier to control every aspect of their workouts as opposed to just turning them loose in a weight room. He says they all seem to like working out with kettlebells.

SA Ron:  Laughs as he says he is able to carry a whole bunch of computers now. Obviously he now has a desk job. But when he travels for work by car he takes his kettlebells with him. It saves him the time of trying to find a gym when he gets to his destination and he gets a great workout.

As you can see, these guys keep themselves in great shape. Not just for professional reasons but to obtain personal goals as well. It is always fascinating to me to see the benefits kettlebells provide all types of people. It was even more exciting to hear first hand from people I’ve met and trained with. The fact that they all have different body types, goals and lifting styles made writing this article especially enjoyable and informative.

It seems the Kettlebell rage continues as more and more people discover how it can benefit their life, health, fitness, and operational skill level. So, another agency and its elite special operations unit has joined the ranks of the growing number of tactical operators both civilian and military using kettlebells in their PT programs. I am told they often put their kettlebells in their operational vehicle prior to loading them on an aircraft to go on assignment. That is dedication. As I stated in a prior article, dedication and heart are key in kettlebell training.